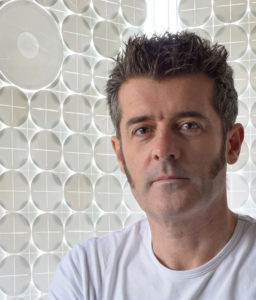 Born in Glasgow 1967, I grew up by the sea on the west coast of Scotland.

Bone china has been my material of choice for over twenty-five years. Whilst undertaking an MA in Industrial Ceramics at Staffordshire University, Stoke-on-Trent I was trained by designers and modellers from Wedgwood and Royal Doulton – many of the skills learned then I continue to use to this day.

A highly alluring yet ‘notoriously stubborn’ clay body, bone china presents many technical challenges – an in-flexible ‘body’ prone to crumbling when worked by hand, an inability to be wheel-thrown and a propensity for pyroplastic deformation – characteristics I have grown to relish over time. To create works, often I adopt high-risk unconventional techniques to push bone china to its limits, sometimes utilising modern technologies as I seek to redefine conventional notions of and develop new modes of expression with this most traditional of materials.

With works spanning domestic scale vessel forms and sculptures to architectural scale panels and screens my output ranges greatly – each piece however shares a common drive to harness and exploit the unique qualities of bone china – its pristine whiteness, ability to take on crisply defined texture and carving and of course its astonishing light responsive properties. Its capacity to switch between translucent and opaque states – instantaneously or gradually – with changes in light is as magical to me today as it was when I first encountered bone china as a young student many years ago.

My work has been shown in exhibitions at venues such as Sotheby’s, the Victoria and Albert Museum and the Saatchi Gallery in the UK, at numerous shows in Europe including with Bernardaud, in Limoges. In Asia I have presented works at a number of group and solo exhibitions in Japan and Korea. And recently I have also shown work in the USA with renowned gallerist and scholar Garth Clark.